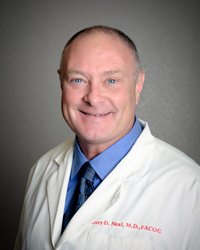 American Board Of Obstetrics & Gynecology

Dr. Neal has been practicing Obstetrics and Gynecology since 1986. He became a Texan in 1986 after having completed his undergraduate and Medical Degrees at the University of Memphis, and University of Tennessee, respectively. From 1992-1996 Dr. Neal served as chief of OBGYN at Baylor Medical Center at Irving. In 2000, Dr. Neal and Cowen moved their practice from Irving, TX to Grapevine, Texas.

When he is not working, Dr. Neal enjoys spending time with his wife and five children; and of course his pride and joy – his Rhodesian Ridgeback named Roscoe. During football season he can be found cheering on his daughters’ alum, the Texas Tech Red Raiders, and of course the Dallas Cowboys. On sunny weekends you might find him cruising around DFW on his Harley Davidson.